Jephte is a FUCKBOY!

Forget all that was said about Lawrence of Issa Rae’s Insecure. Jephte is the epitome of what a fuckboy looks like, acts like, says and does. He is the worst of what women say about men!

Who is Jephte, he’s the 26 year old African American man married to Shawniece on the current season 6 of Married At First Sight. The premise of the show is you take a chance on love. You meet your bride and groom for the first time at the alter. Over the course of the next 6 weeks the couples learn about each other, grow together and live life as a married couple. At the end of the 6 weeks, the couples decide whether they want to get a divorce or stay together. 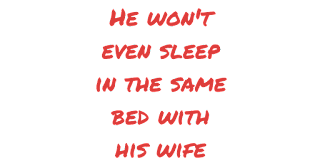 He won’t even sleep in the same bed as his wife. Let’s remove the shallowness of beauty, Shawneice is actually a very attractive woman, even when see takes the makeup off. She’s your wife dude! Shawniece thus far has shown to be the most engaged participant, I have seen on this show going back to season 2. Jephte’s problem isn’t that he’s a bad guy, because it doesn’t seem to be that. The problems apparent in their married is a little more than that.
Sir! You had to have an idea of what you were getting yourself into. ITS CALLED MARRIED AT FIRST SIGHT. Married being the key word there. From seeing what Jephte portrays on T.V. each week, I know understand what women have been saying about what a fuckboy is. Because sir you are epitomizing that on a weekly basis. While the outcomes have already been determined, because of course we are seeing this all after the fact, my advice to all the other fuckboys out there is this.


STOP NOW! Don’t continue to waste your time or continue to waste her time. It’s pointless. Find someone that will be on the same wavelength with having their time wasted and emotions unattached. At this point in the season I feel bad for Shawneice, we as the audience can only hope their relationship turns around and that they can really make it, because we all hope for life long love and marriage. But both partners have to be willing to be fully engaged and committed to learning, growing and feeding into one another. No one has time for a fuckboy and right now Jephte you are a FUCKBOY!
Email Post
Labels: #MarriedAtFirstSight #Married #Jephte #Shawniece Life Love Relationships