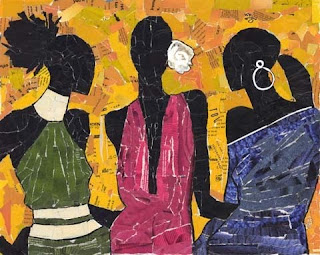 When I left off in the first one, didn't really thinking there would be a part two, I was talking about but not really dating a woman from another race. Well it didn't happen, well kinda sorta I'll explain and there is definitely more to add to the story now. A little of the old but definitely more of the new.

Me and the last girl, the one that just got out of her 5 year relationship, abruptly stop talking. Here's the kinda sorta but not really dating outside my race. She's Ghanaian, educated, and very interesting. Won't detail too much beyond that but she's worth a headache or two. We've known each other for a while now and things never really went to far, for one reason or another. She had a man, I had a woman, I was thinking of moving, she was away, just a number of things. So we both see now that were both single, here in the city, why not try and give it a shot. So we do, you know the consistent conversation starts, a couple of dates, then it happens. Her job is sending her to London until November. Bye see you later chap!!

In between her and the next significant one that will require detail. There was the newly found myself lesbian, who had feelings for me before but we both were involved. And just didn't take each other serious at the time. Then there was the one who've I always had something for, if she just wasn't so crazy I could actually get with. Well she went off to school and we know how that goes.

Before I get into the Almighty weirdo, somewhere in between me and 5 year relationship got reacquainted, kind of. No not fucking or anything, amends were made.

So now everyone say hello to "I live in my own world." First let me say this woman is a sweet, energetic and means well woman. But her and I are on TWO DIFFERENT WAVELENGTHS. Mine more intoned to how things actually function in the world and hers well I live in my own world should explain enough. Things started out pretty well between her and I, got to meet the family, have real conversation about each other, and just getting to know her. For a while I stayed with it, the I live in my own world wasn't a bad where you're conceited and stuck up I need to get away, so I was pretty fine. What eventually separated her and I was me meeting the headliner of this story.

Beauty is her name, the meeting wasn't by chance but was one that caught me off guard. So lets put it like this, she's a very attractive 20something, a degree of some kind and a daughter. None of which made me the least bit unattracted to her, not even the daughter thing. There wasn't any baby daddy drama or issues and she showed herself to be a great mother. Words get said, feelings get exchanged, and before you know it she's a boo and I'm her boo. Well. Time passes, dates happen, New Years is brought in, disputes occur, and then there's it. What's the it, the it is us not getting together as a couple and the shit just dissolving. Early morning of Valentines day; after a moment of unappreciation (yes made up word), us just lacking the push to be a couple, el trabajo (that means work), and them we just decided to leave it alone. It was a little more messier than that but I'm writing this and like my blog to be somewhat clean.

Finally there's the new kid on the block, it's still relatively earlier and things are still falling into place not all in a bad way. This one right now in my head is 50/50; she's a lil younger than me which means still has maturing to do. But she's a very independent and ambition lady with looks and a great personality to match. So I'll give it its just time and see where things go. Ay she might be my last aint shit woman for a while.

So have I learned anything new after all this, yeah kind of. Relationships aren't just about personality, or compatibility or you being ready for that next step mentally it's also about timing. It plays a big deal in it all and it looks like my timing has been off.