So today as I’m on my way to the mall. I began wondering again on why do black people, who in this day and age have the right to sit in the front of the bus as anyone else does, choose to go to the back. Especially if you’re one of the first to get on the bus. This is something that has quite honestly always made me wonder. 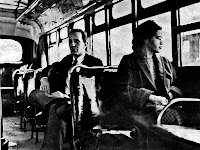 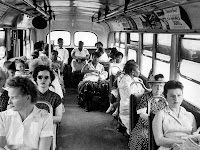 We hear all the time that we have to break the cycle, that we need to move past the days of slavery and segregation. But when I observe this, it makes me wonder on how do we truly move past those times. Every year since, we celebrate and honor Rosa Parks for her protest not to give up her seat to a white man. (I will note, that I truly do not believe her protest was as significant as its made to be. There were many other black men and women who did the exact same thing and none of them are honored in the same light and they should be.)
I see it and it starts early. Parents who guide their children not just to a seat, but to a seat at the back of the bus. I’ve seen times where the child will indeed choose a seat in the front of the bus and the parent will instead move them to the back. After a while it will become routine for that child just to pick the back of the bus, and disregard his or her right to take a seat in the front.
With this continued activity of going straight to the back of the bus, can we say we are truly honoring Rosa or the Civil Rights movement as a whole? I say we are truly failing to honor those strides. Which just adds to one of the several ways we are failing to upkeep or uphold the hard work of Martin, Rosa, Malcolm and many others. I’m not trying to degrade anyone of African American descent who chooses to sit at the back of the bus. But just keep in mind that many before us fought, blood, sweat, and tears to gain the right to sit at the front of a bus. Let’s just try and continue to honor them by sitting at the front if not always when available, but at least every now and then.
Email Post
Labels: History Life Social Issues

Anonymous said…
I have seen this. I do not move to the back of the bus, but I do not sit directly in the front either, because once an elderly or disabled person gets on the bus; I will give up my seat that way they do not have to walk to the back for an empty seat.
February 25, 2011 at 1:12 PM