First African American to hold a Cabinet level position in the United States government.
First appointed as an informal advisor during the years of Roosevelt's administration.
Robert a graduate from Harvard University with a BS, MA, and a Ph.D in Economics.
Also worked in the Kennedy administration, and at the time held the most degrees from any prestigious university than any other top ranked member of the administration. 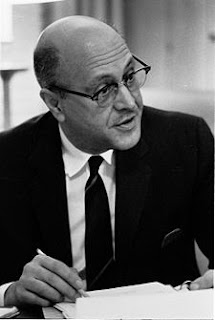 Robert would go on to be named the administrator over the Housing and Home Finance Administration.
Not yet a federal department, Kennedy pushed for the creation of the Department of Housing and Urban Development (HUD), with the hopes of making Weaver its Secretary.
In 1965 the department of Housing and Urban Development, was established. Then President Johnson  deeply considered who would be named Secretary of this newly established department and Cabinet position. Weaver was always in contention, but Johnson had his doubts. Ultimately he would go with the right man for the job. In 1966, he was confirmed as the first African American to hold a cabinet level position in the United States government. He always was the first Secretary for the newly established Department of Housing and Urban Development. Weaver served his time in the position honorable. In 1969, he would return to Academia, where he would be the President of Baruch College, in New York City.
http://theoryrepublic.com/post/3108344689
Email Post
Labels: History Life